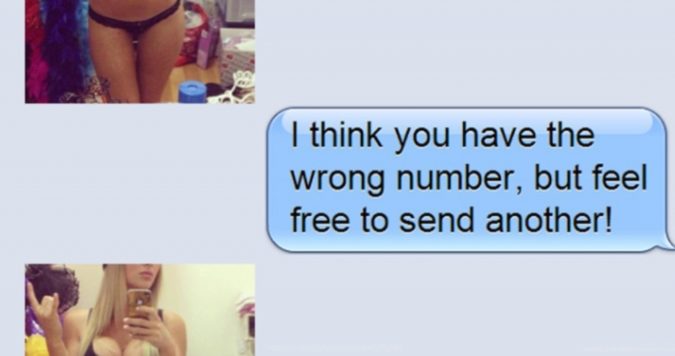 RESPONSES TO WRONG NUMBER TEXT MESSAGES THAT ARE HILARIOUSLY PERFECT

We’ve all experienced that awkward and unfortunate moment when we realize we just texted something random to the wrong number. I mean, we guess it’s better to text a stranger than to text something super embarrassing to someone you know accidentally. Well, on that note, we have some of the best wrong number texts we’ve ever seen… 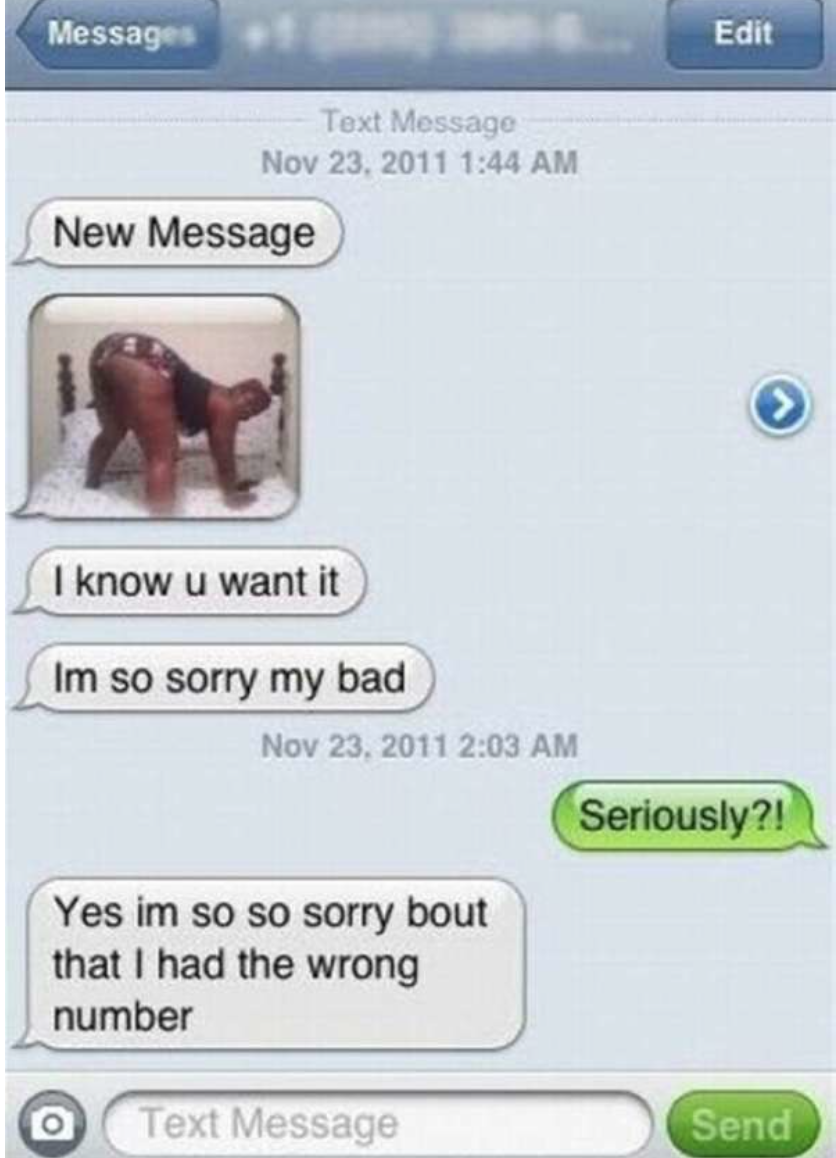 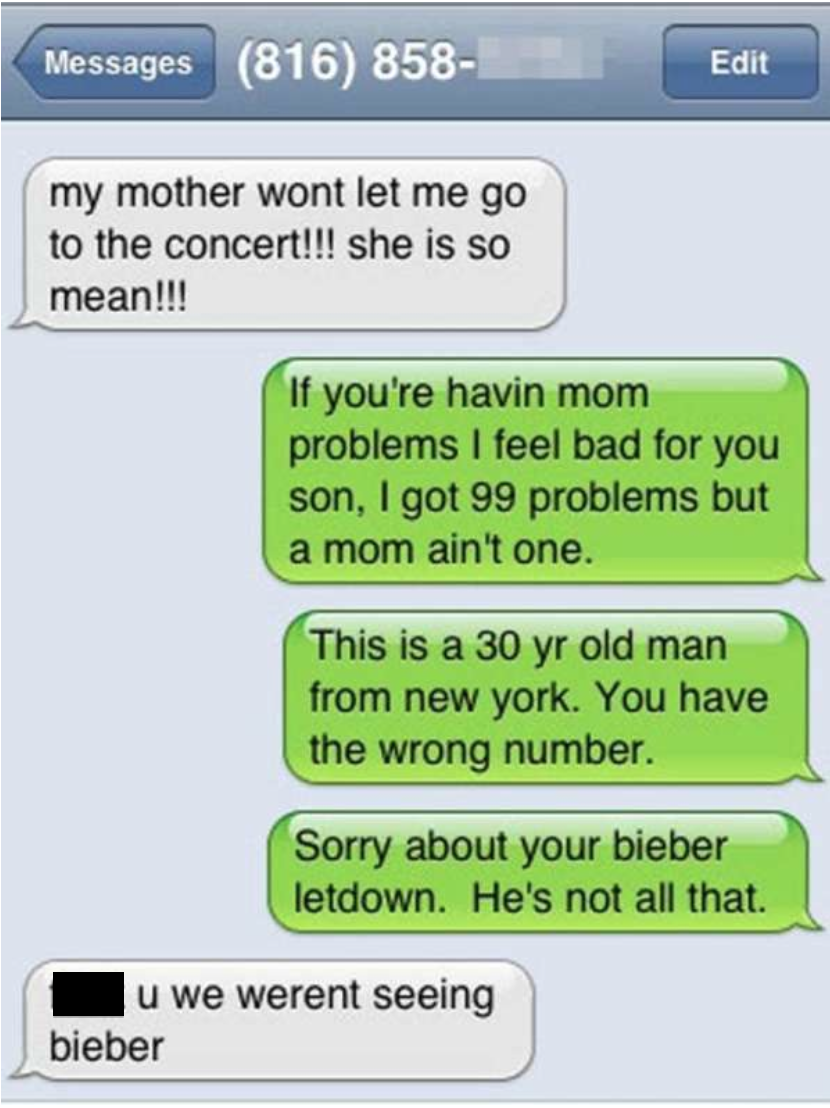 This next wrong number text would be scarring to receive, to say the least. This woman was obviously sending a dirty text message to someone she knows… However, turns out she sent it to the wrong number it looks like he really, really did not want it. Just saying. 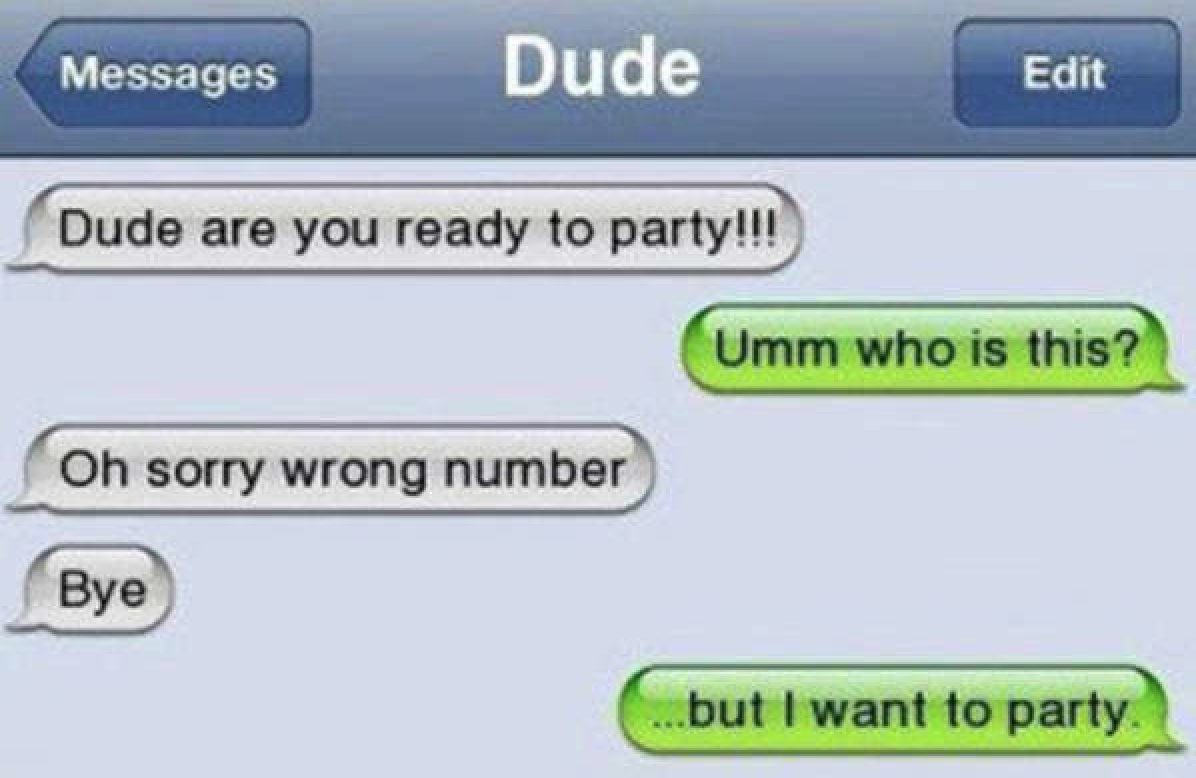 Perhaps the guy just assumed the person texting him at the wrong number was going to a Justin Bieber concert because of the fact that he or she was acting like a 10-year-old, complaining that the mother would not let them go to the concert. You have to admit, his response is pretty hilarious. But they weren’t even going to a Justin Bieber concert… Geez!

Yes, we have more of these hilarious wrong number texts, so keep reading! This next one is great. I mean, we genuinely believe that all this guy really wanted to do was party… 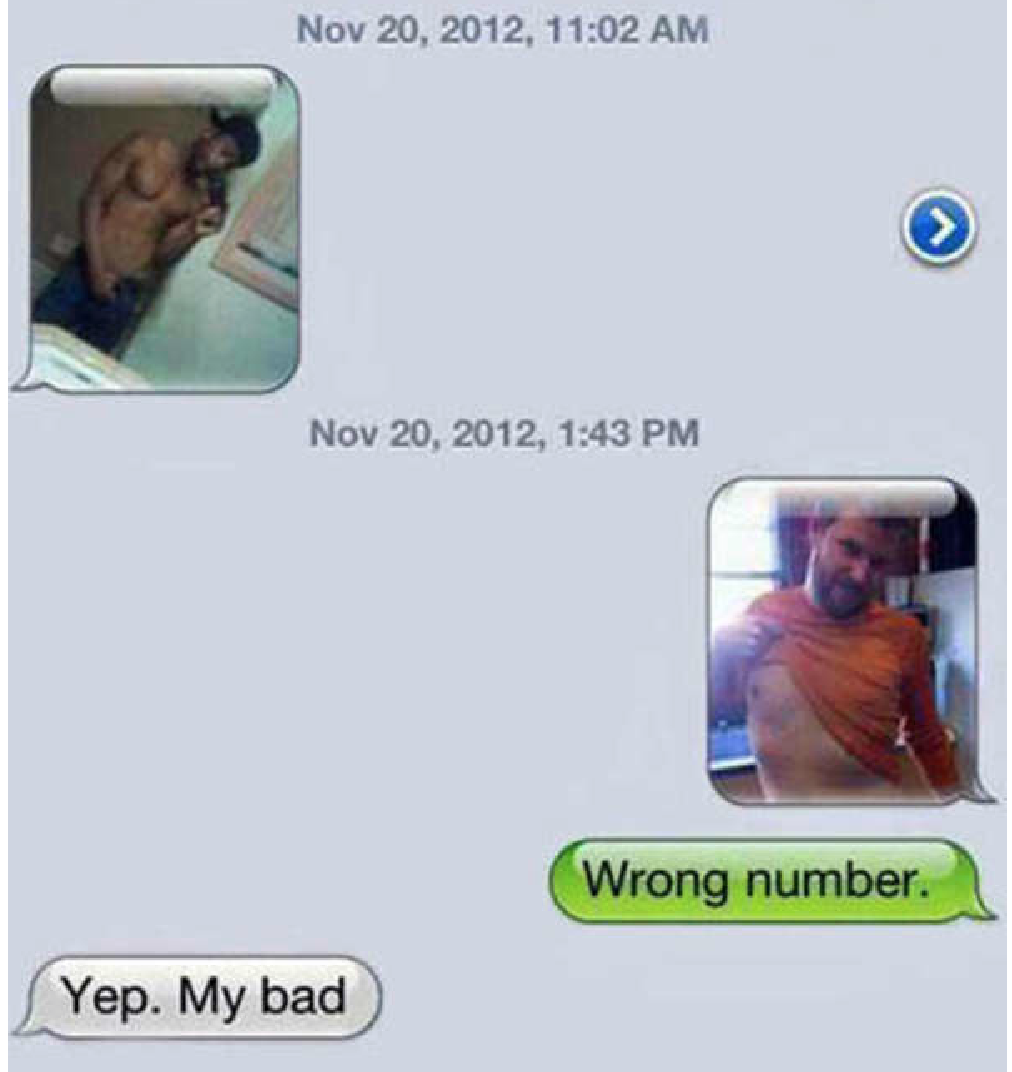 A guy sent out a random text message to the wrong person saying, “dude are you ready to party!!!” The response he got was, “Umm who is this?” That’s when he found out he had the wrong number so he responded saying so. However, this guy was not letting it go… he just wanted to party. 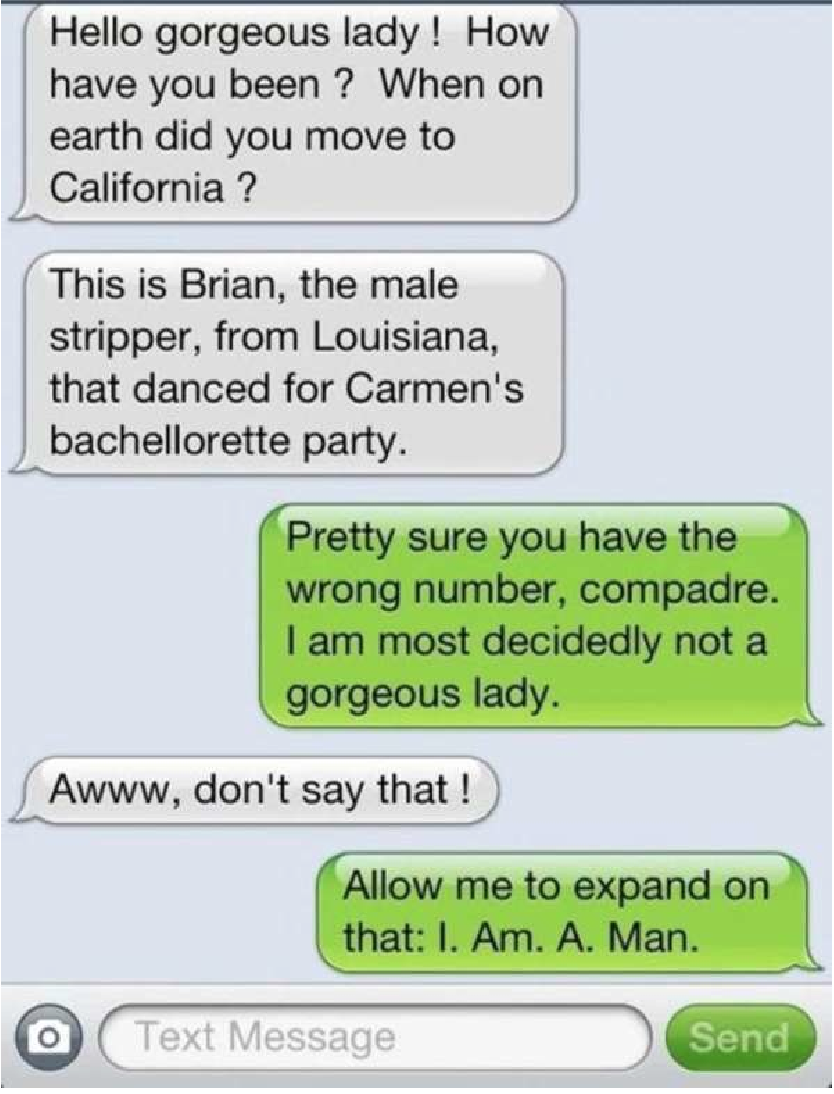 What do you get when you send an accidental photo with your shirt off to the wrong person? You get an identical response. This hilarious guy sent back a photo making a sexy face. This was his way of letting him know he had the wrong number. You have to admit, this was a pretty hysterical response. 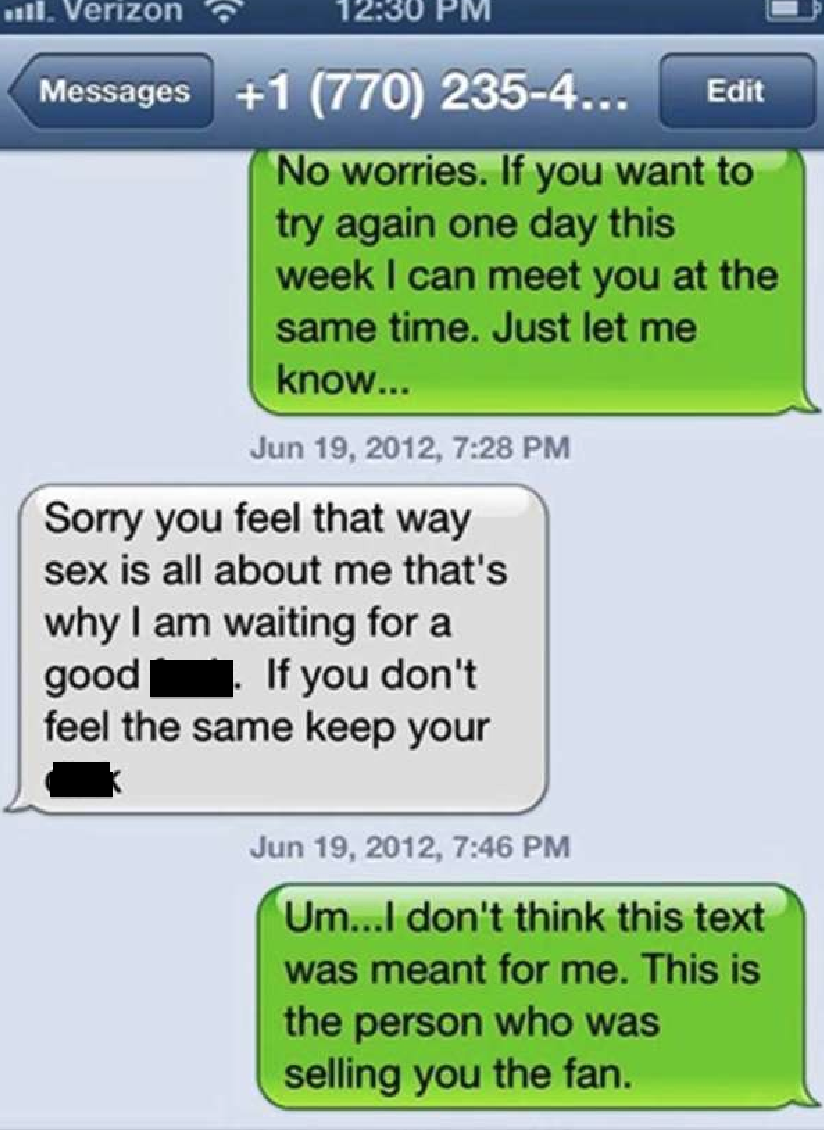 So, Brian has definitely got some nerve, doesn’t he? Apparently, he is a male stripper from Louisiana, and he is trying to reach out to someone he met at a friend’s bachelorette party. Too bad he texted the wrong person. In fact, he ended up texting a guy! At the end of the conversation the guy hilariously said, “Allow me to expand on that: I am a man.”

Yep, just when you thought things couldn’t get any worse, you have guys like this who accidentally send out text messages without checking the number they are texting. All this person wanted to do was sell him a fan. 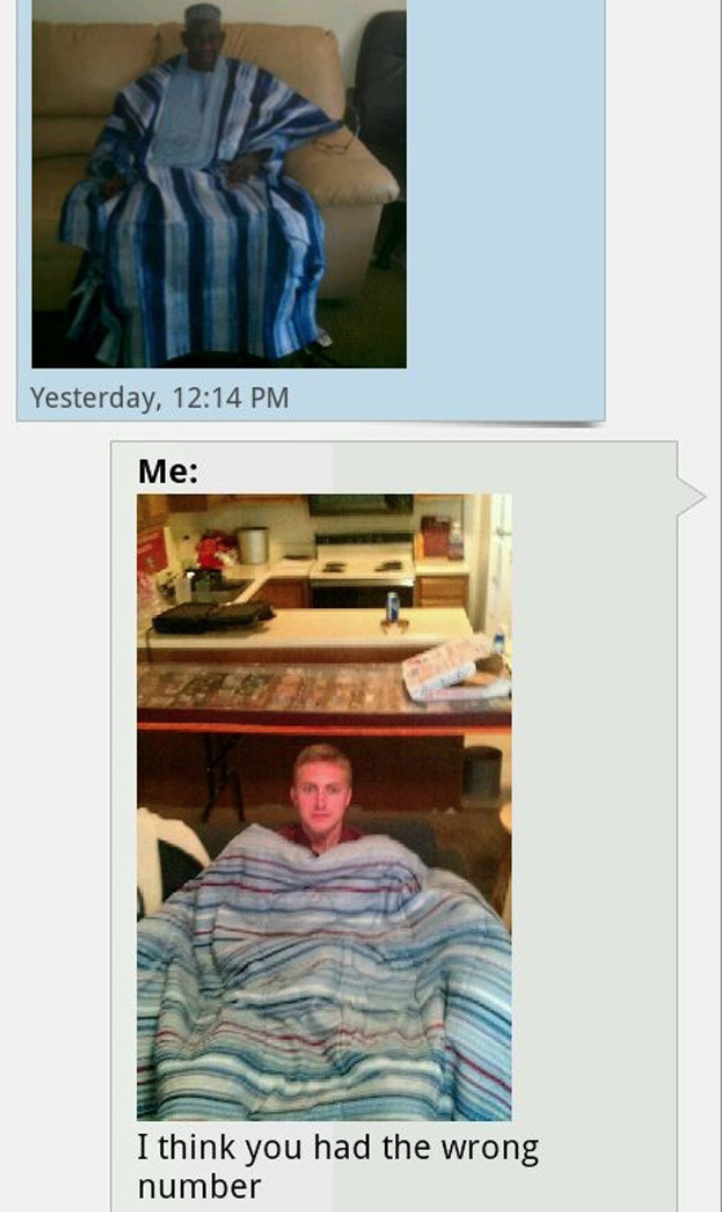 Apparently this guy has something sex-related going on in his life that is not going so well, am I right? The original texter responded saying, “I don’t think this text was meant for me. This is the person who was selling you the fan.” Yeah, this person is likely scarred by now. 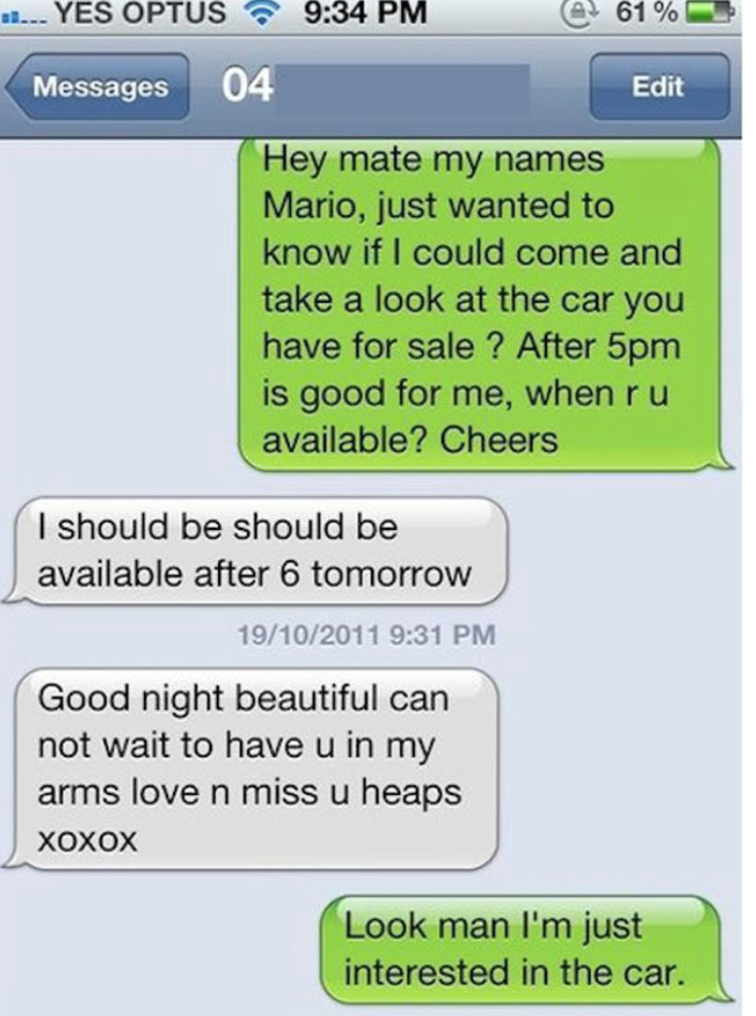 This random guy sent out a picture to probably who he thought was a friend of himself sitting on a chair with a massive blue dress of some kind on? The guy receiving the message had the most perfect response. He simply threw on a blue blanket that resembled the guy’s dress and let him know he had the wrong number. 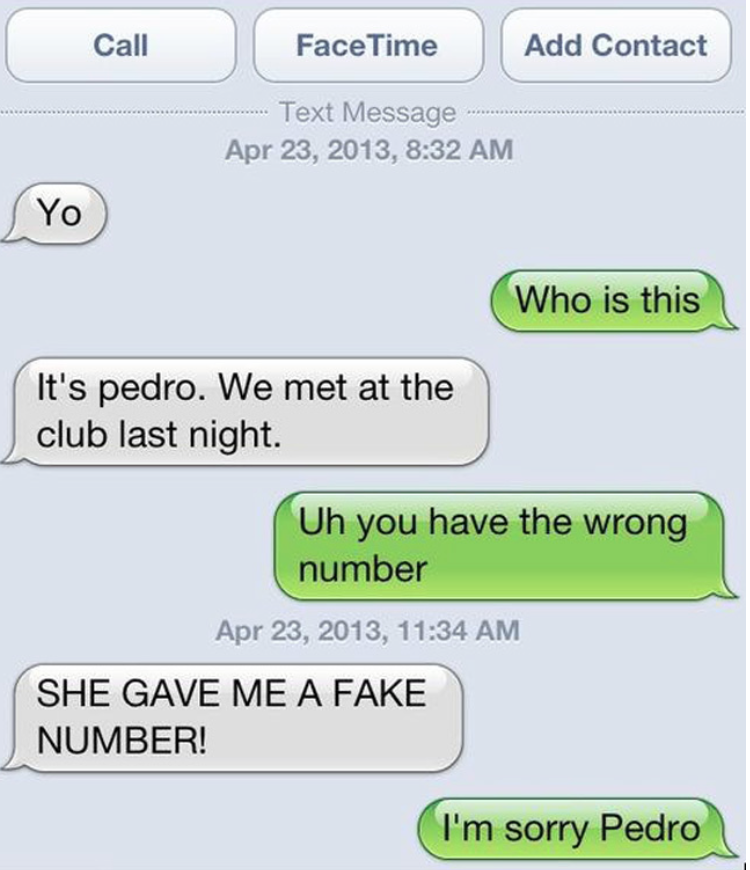 This guy was obviously just interested in the car that this other guy had for sale. He was obviously not looking for anything romantic… Especially the sappy text message he received the night he reached out to him about the car. So hilarious and hopefully a mistake.

Just when you thought things couldn’t get worse, they got sadder. This is a story about a guy named Pedro who met a gorgeous girl at the club. They exchanged numbers and…well… 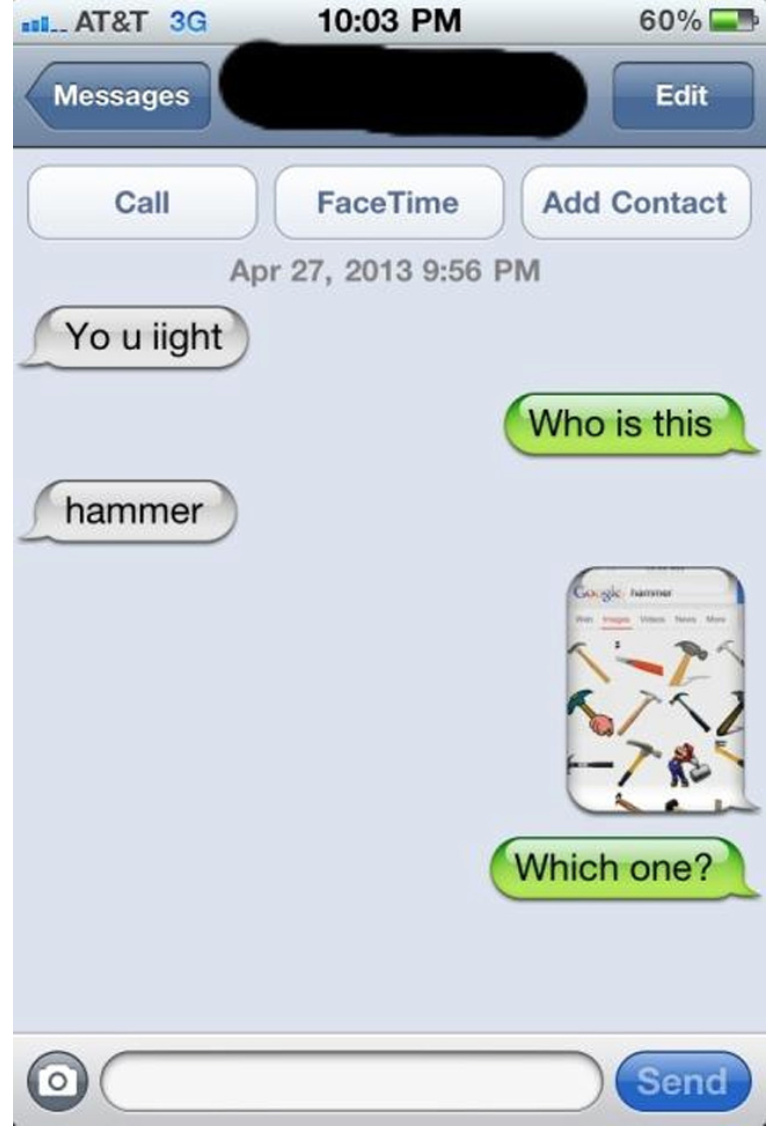 Poor Pedro was just reaching out to a girl he met at the club the night before. Unfortunately, it seems like the girl he met wasn’t as into him as he was into her. In fact, she even ended up giving him the wrong number. We are going to assume that was intentional. We love how the guy responded by telling Pedro he is so sorry. 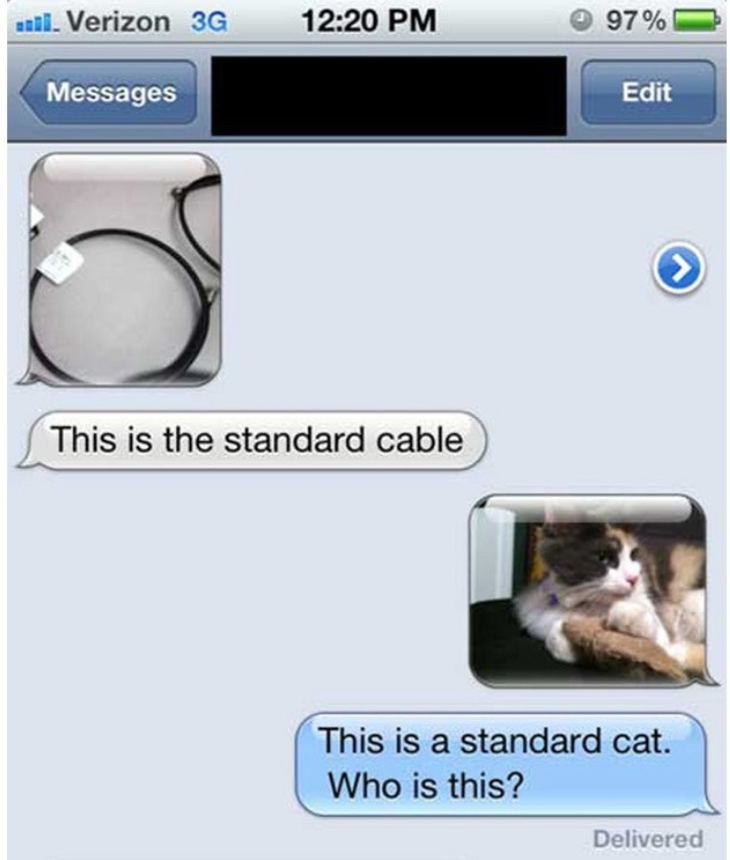 Ask a normal question get a crazy response. This guy got a random text message that asked if he was ‘iight.’ He responded by asking who was texting him. The guy responded saying his name was Hammer, so obviously the guy sent a picture of a bunch of hammers and asked him, “Which one?” 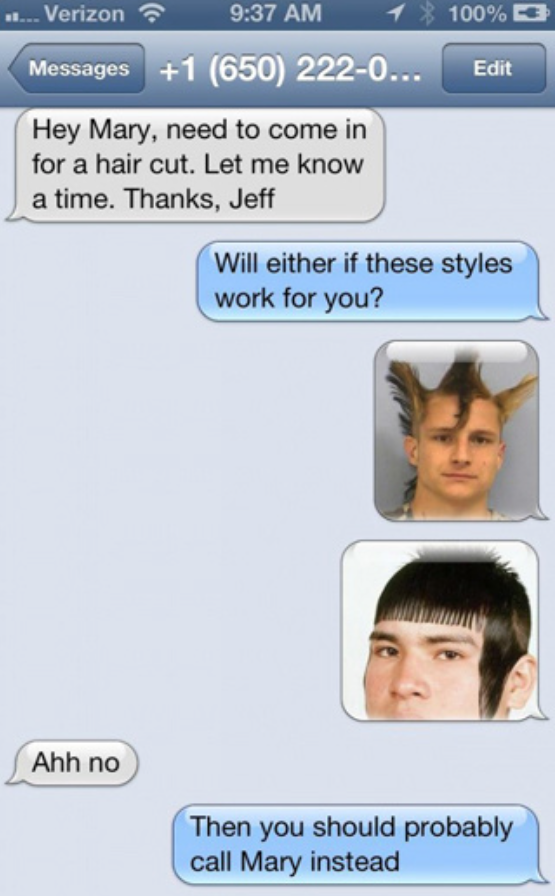 This person sent a text message to the wrong number explaining what standard cable was and including a picture with it. The person hilariously responded with a photo of a cat telling him that this is a standard cat, and then he wanted to know who was texting him.

This person thought they were texting their hair stylist…turns out they had the wrong number. They said, “Hey Mary, need to come in for a haircut. Let me know a time. Thanks, Jeff.” 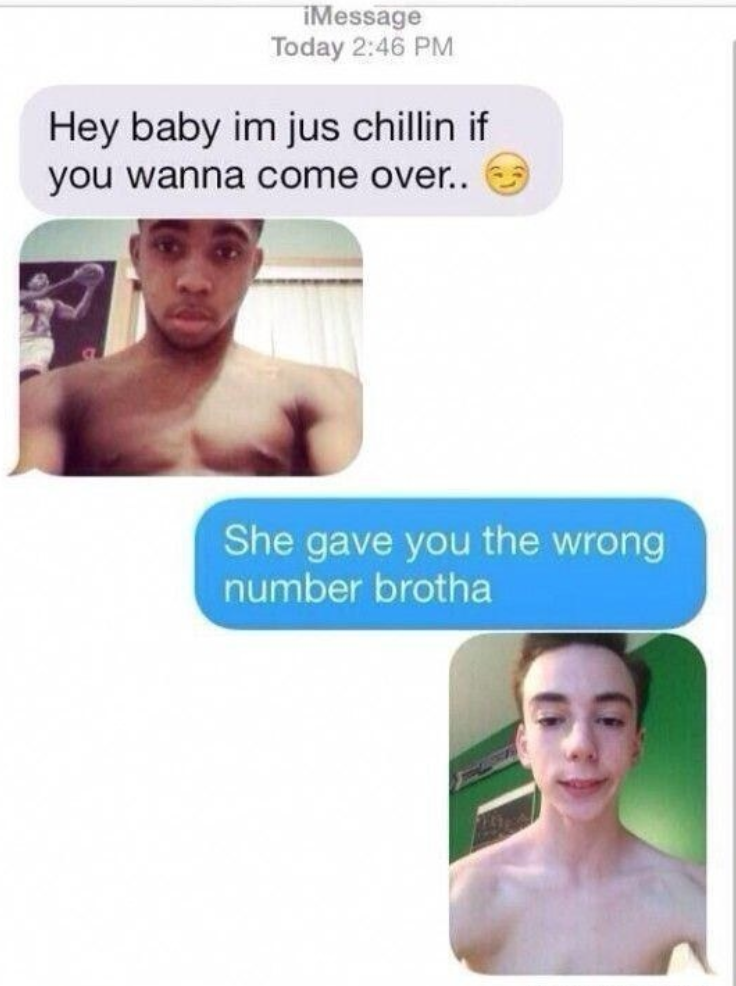 The person then responded with two hysterical hairstyles asking if either of those work for the person. When the person responded no, they told he or she that they should probably contact Mary instead then. Man, doesn’t look like this is the type of person to contact for your hair needs. 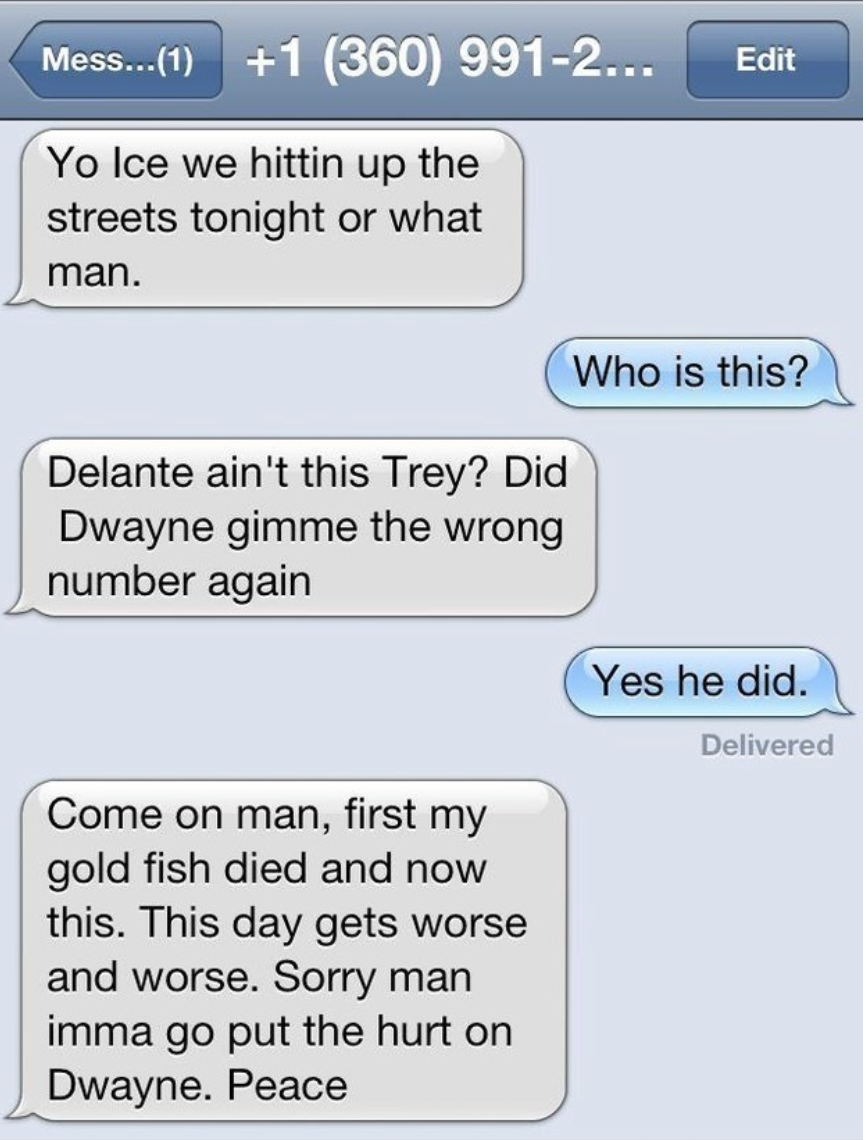 This guy was probably texting somebody he met at the bar or club the night before. He sent a picture of himself saying, “Hey baby I’m just chilling if you want to come over.” He accidentally sent this to a funny guy because the guy responded telling him the heart shattering truth that this girl obviously gave him the wrong number. The truth hurts. 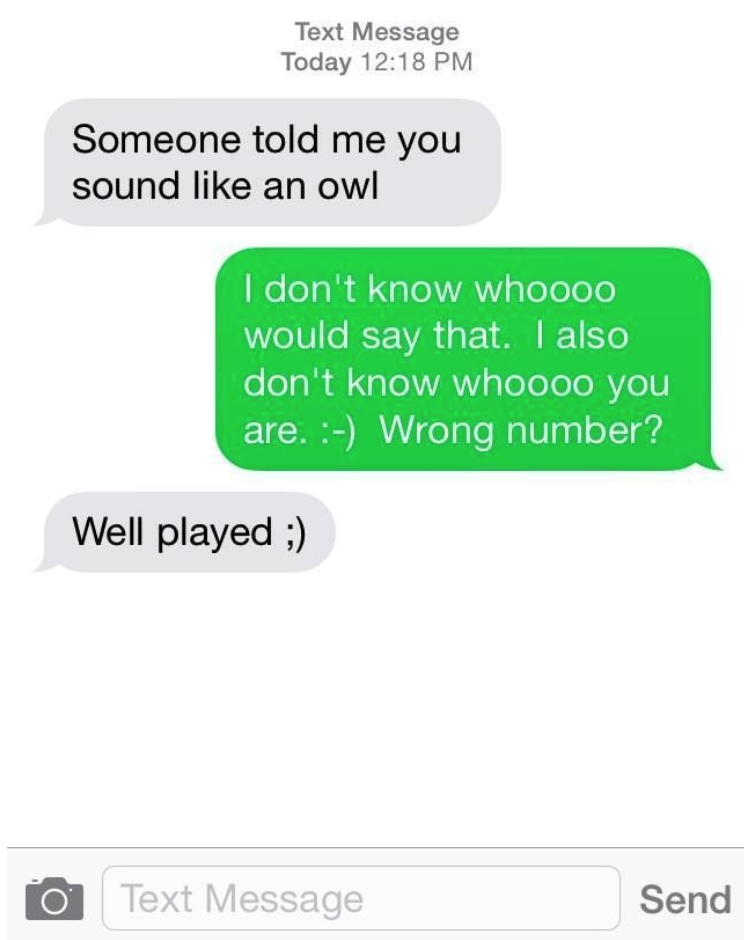 Yes, don’t you worry… We have a ton more hilariously answered wrong number text messages for you to enjoy and laugh at. We are just wondering if these bring up any bad memories of times you’ve texted the wrong person before. We are going to guess that answer is yes. 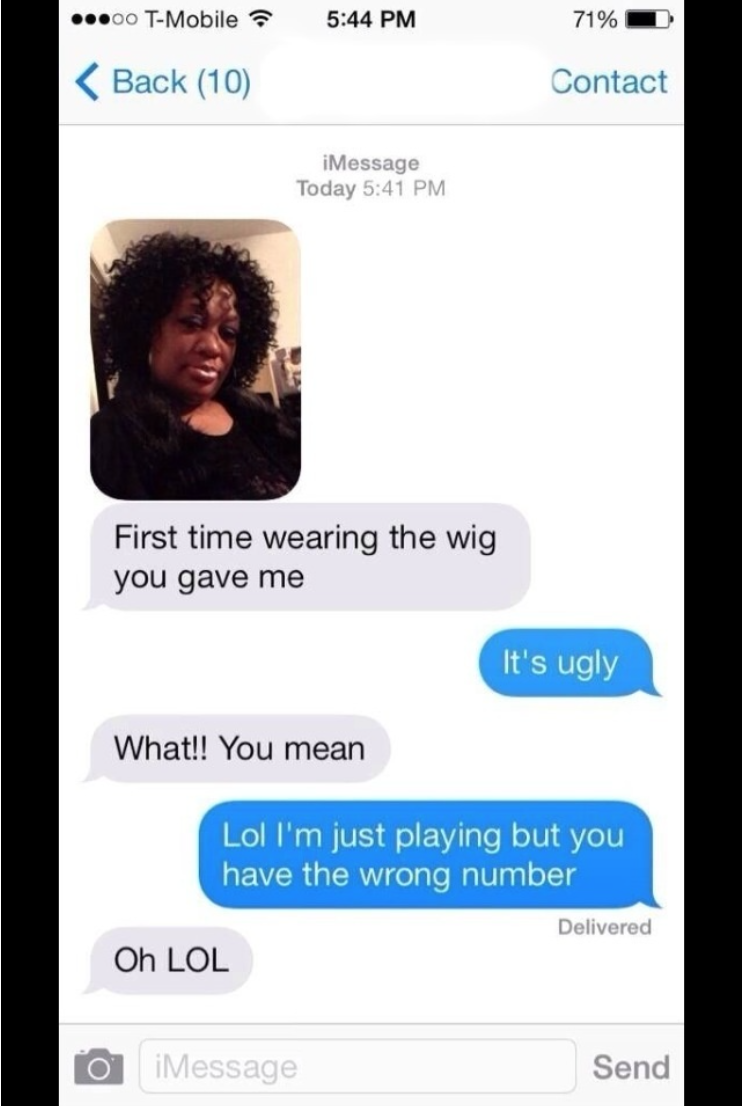 We do not know why this person texted someone saying they sound like an owl, but what we do know is the wrong number he texted responded in the best way possible. They said, “I don’t know whoooo would say that. I also don’t know whooo you are.” the person responded saying it was well played. 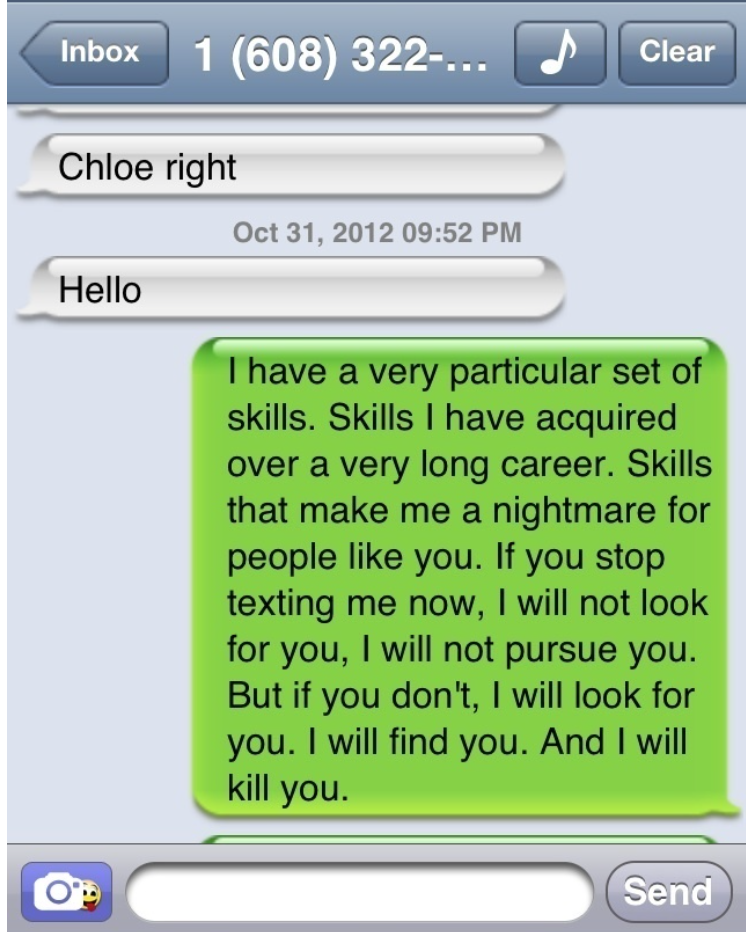 We are sure the woman who sent this text message was about ready to kill the friend who bought her the wig and told her she looked horrible in it. Fortunately, she sent it to the wrong number. we are sure she got a pretty good laugh out of this after the fact. 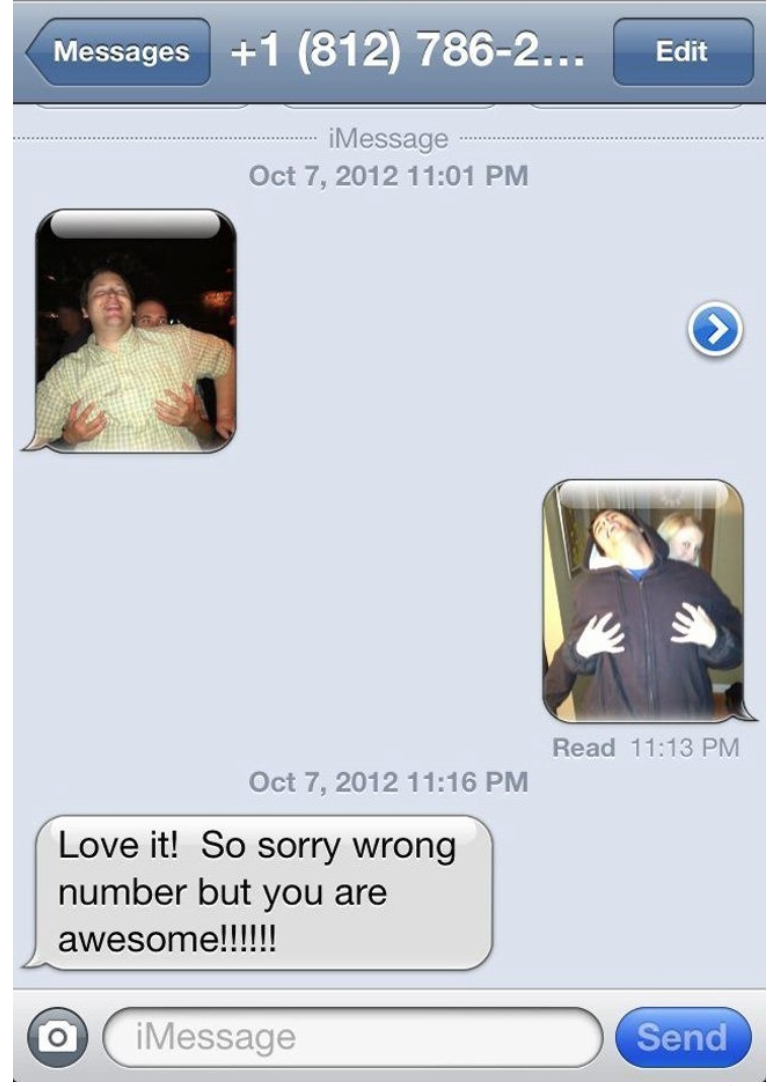 We can only hope the girl who sent out this wrong text message has seen the movie “Taken” before. If she hasn’t, she is likely freaking out right now and possibly even contacting the police. I mean, if I hadn’t seen it I would be pretty terrified receiving a text message like this, too!

The guy’s response to this next wrong number text message is pretty hilarious. It looks like this guy may have found his new best friend via text message. You just never know when your life is going to change, now do you? 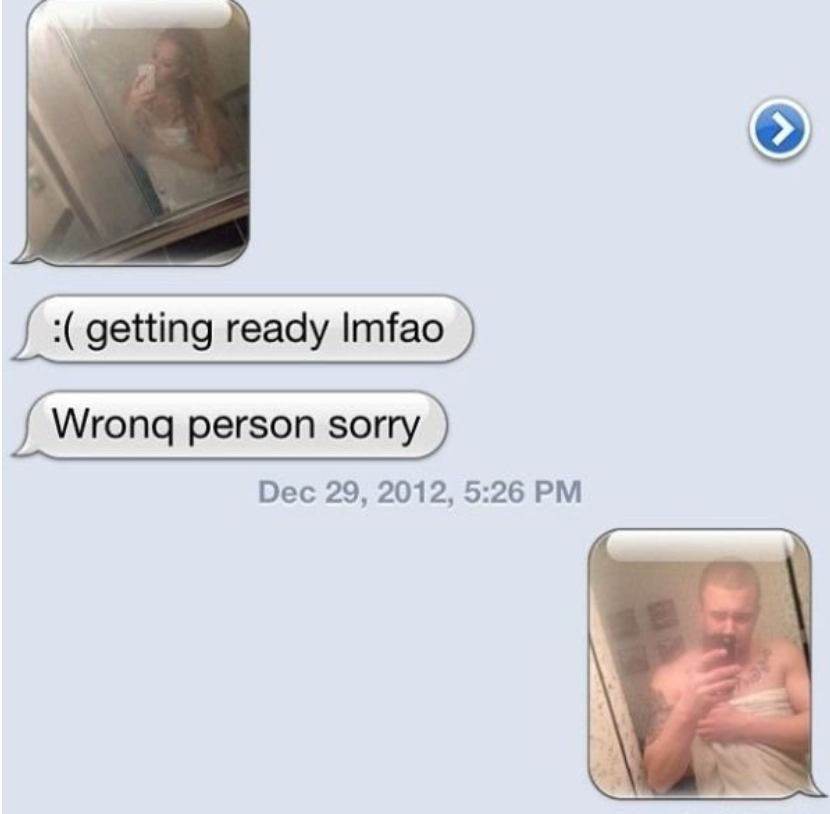 It looks like we found a match made in heaven. or possibly they found their new best friend because it looks like they have the same humor and stupidity. This guy sent a photo of someone grabbing his man boobs and the guy who received the strange text sent a picture right back. Besties for life? 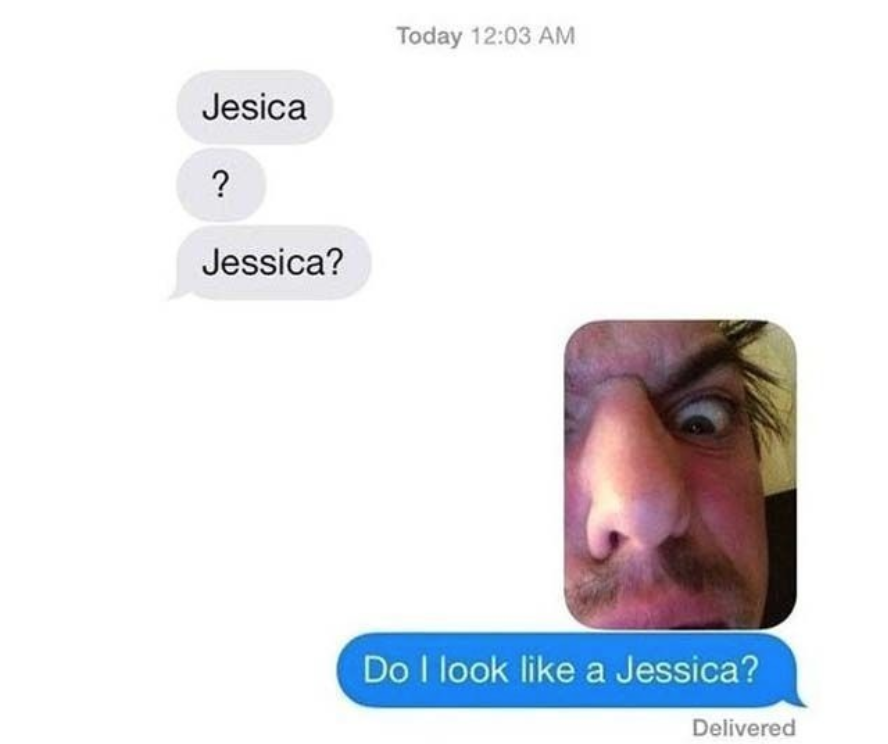 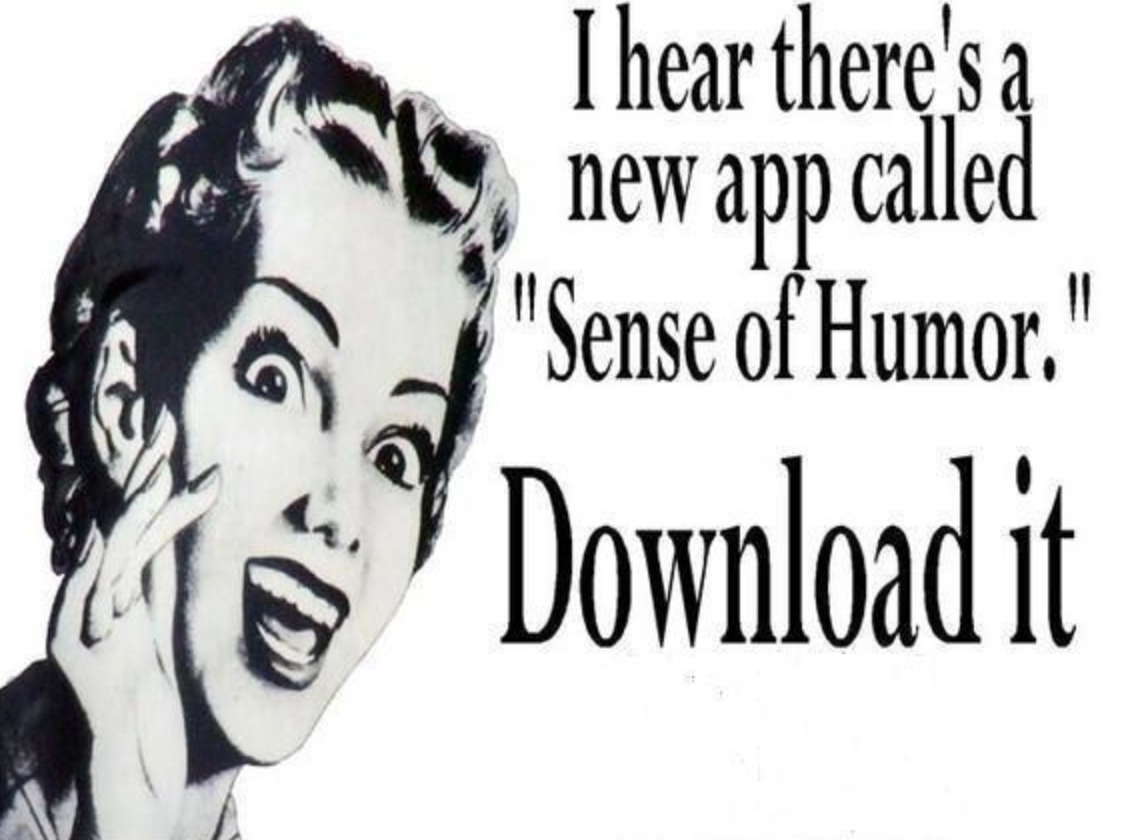 Tell me a text message response like this wouldn’t scare the crap out of you. This girl is apparently looking for a Jessica, but it’s pretty obvious that she has reached the wrong number. No, this does not look at all like a Jessica. So funny!

Now, what do all of the responders to these text messages have in common? Yes, that’s right, they all have a great sense of humor! Your sense of humor is super important for countless reasons. For one, it will change the way you see the world entirely! It’s basically your perspective on things and on life. 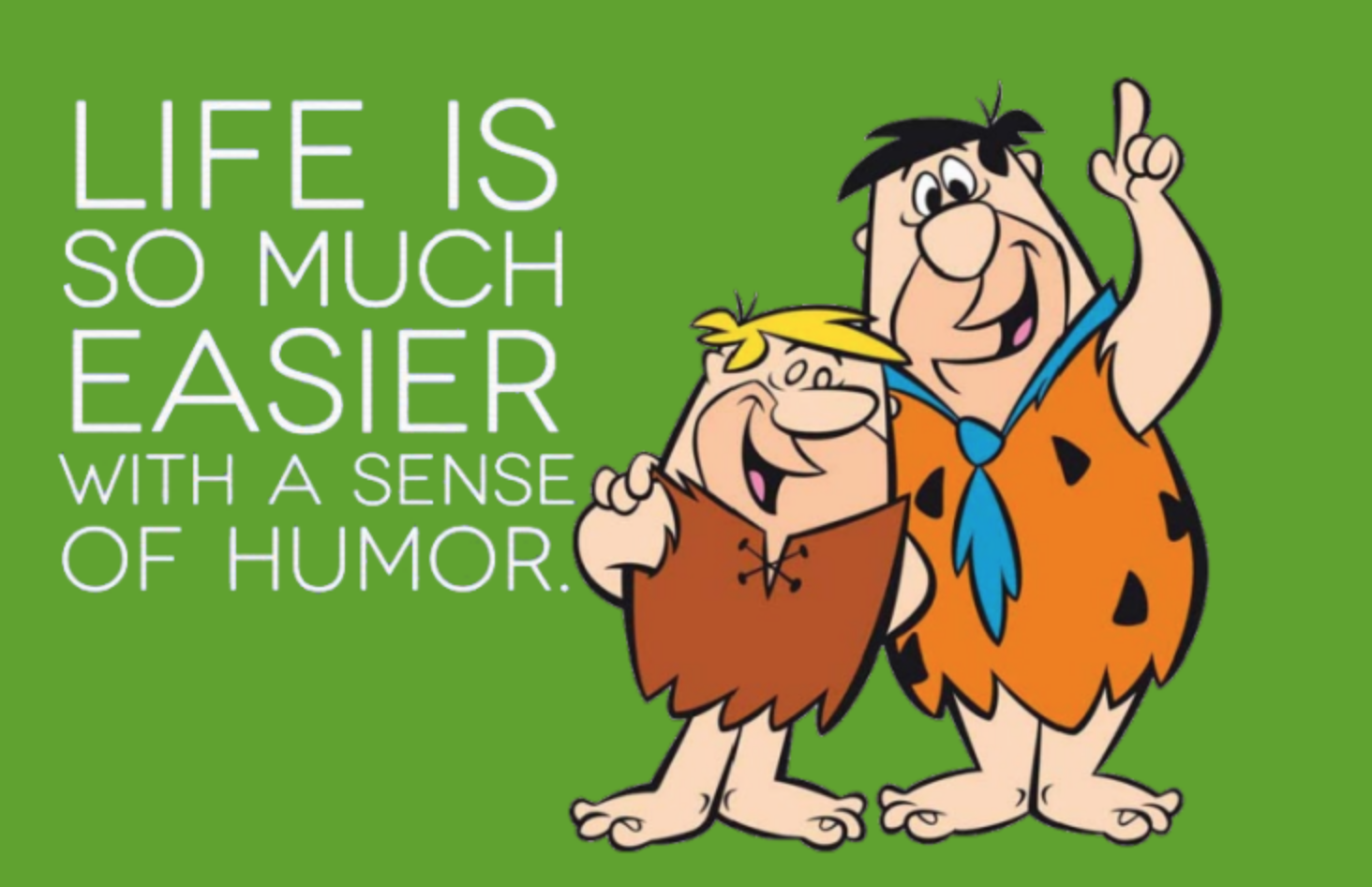 It’s the key to being happy. Sure, other factors come into play when it comes to happiness, but having a sense of humor can lighten up both your life and the lives of those around you. If you receive a wrong number text message, don’t scream and shout at the person, have some fun with it… 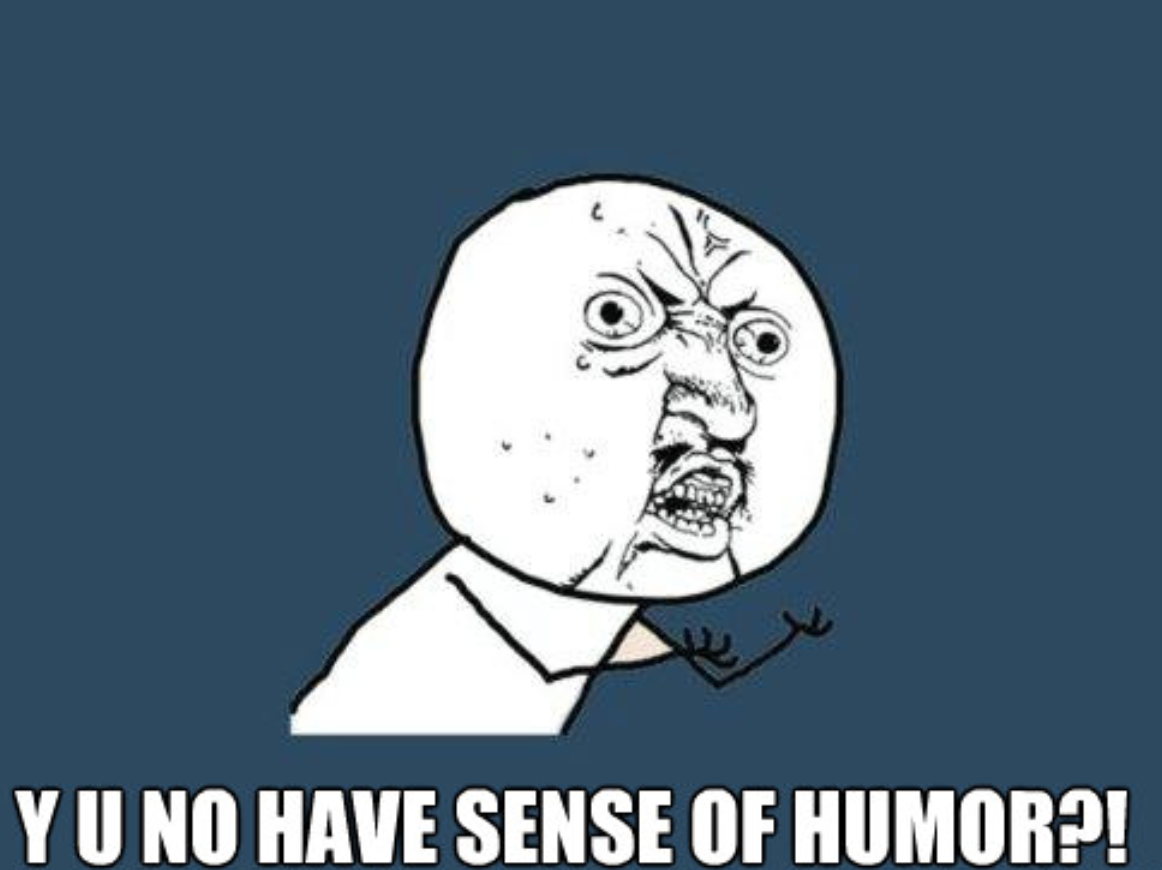 It’s good to know that while your mood is subject to change, your sense of humor isn’t. If you have a sense of humor, it should not come and go. Sure, you may be moody sometimes, but once you snap out of that funk, you should see the world in the humorous way you did before! 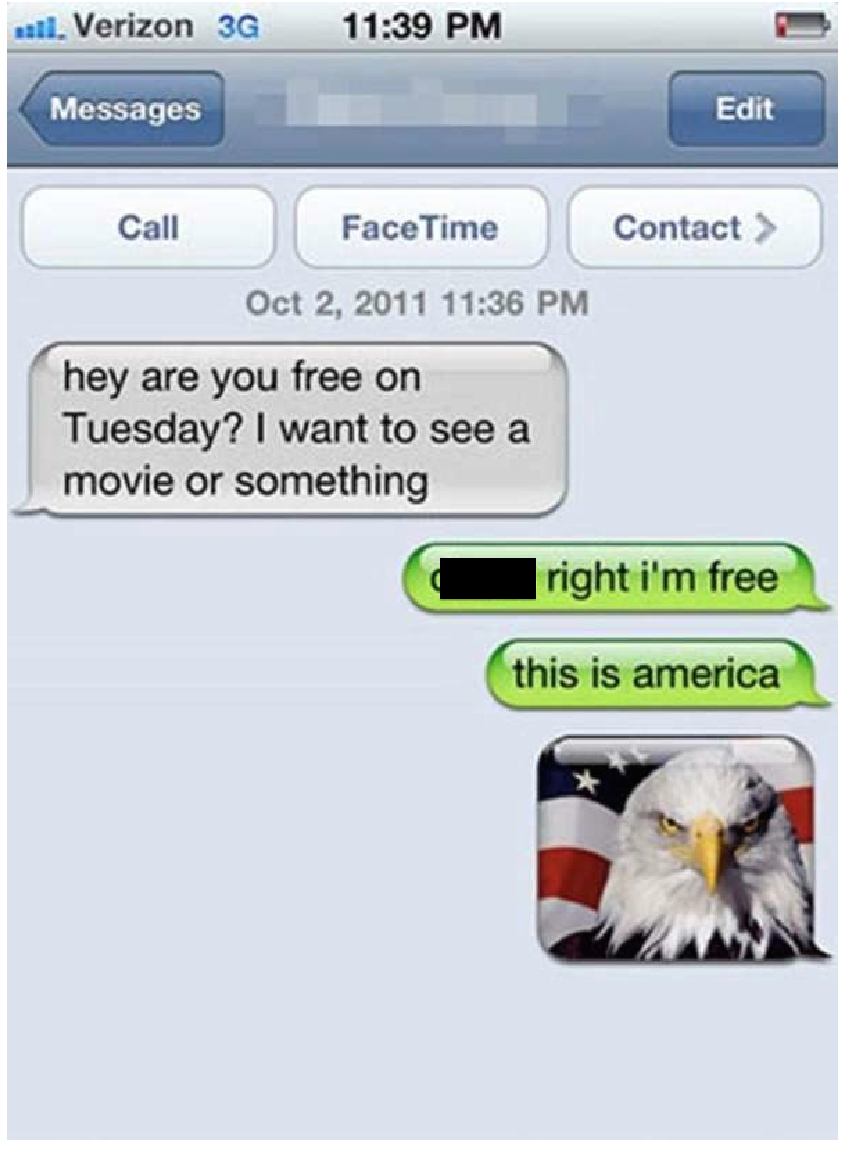 So, what did you learn from all of this? For one, check the number you’re texting before you send out a text message to avoid all of this to begin with. Second, lighten up! Life isn’t that hard. Having a sense of humor is a good way to live.

15 Funniest Texts From People Who Hate Their Ex